National Debt Will Explode Under Biden or Trump

A new report shows the national debt just keeps getting worse. There’s only one way to get us out of this mess

In our ultra-tribal politics today, both sides often frame elections as catastrophic. If the Bad Team™ wins in November, we’re told that everything will fall apart. But if the Good Guys™ are elected, then everything will be okay.

This narrative might help partisan activists drive voter turnout, but we just got even more proof that it isn’t based in reality. After all, the disastrous state of our public finance and runaway national debt is one of the most pressing issues facing our country. But a new report from the nonpartisan Committee for a Responsible Budget shows that we’re in trouble no matter which party wins the White House.

“Under current law, trillion-dollar annual budget deficits will become the new normal, even after the current public health emergency subsides,” the organization warns in its introduction.

“Meanwhile, the national debt is projected to exceed the post-World War II record high over the next four-year term and reach twice the size of the economy within 30 years,” the report reads. “Four major trust funds are also headed for insolvency, including the Highway and Medicare Hospital Insurance trust funds, within the next presidential term.”

Things are already bad—and they’re only getting worse.

The national debt just recently broke an astounding $27 trillion. That’s $216,000 per US taxpayer. The study analyzes the spending and tax proposals from President Trump’s reelection campaign and those of his Democratic rival Joe Biden to see how they would impact this crisis.

Turns out, prospects are bleak under either one.

????????BREAKING????????. The analysis you’ve been waiting for is here. @BudgetHawks estimates that @JoeBiden would add $5.6 trillion to the debt and @realDonaldTrump would add almost $5 trillion. 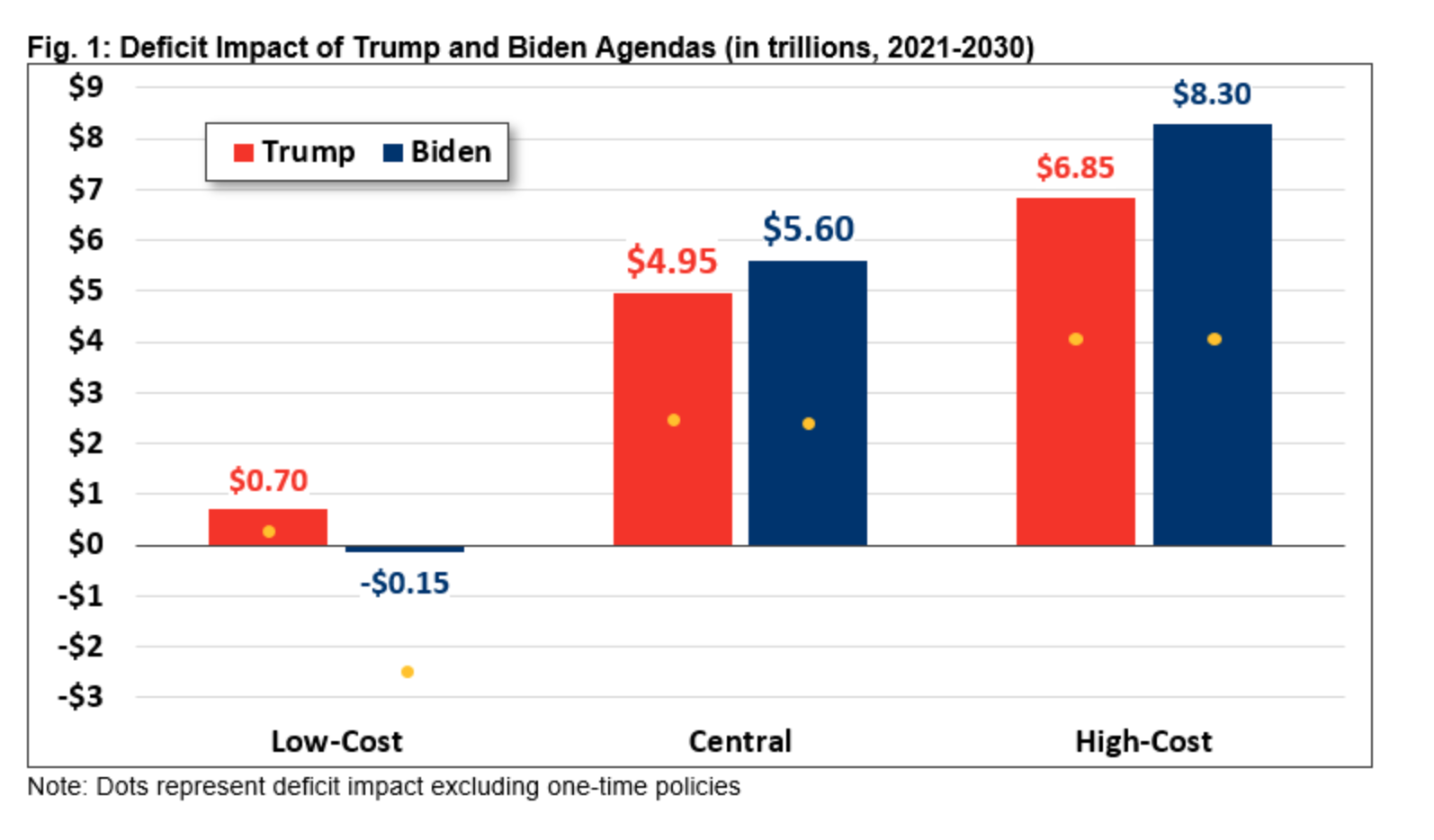 It’s important to analyze debt figures relative to the overall size of the economy. Under the status quo, the federal debt is projected to hit a 109 percent debt-to-economy ratio by 2030. Under Trump, it would hit 125 percent over that same time frame; under Biden, it would hit 129 percent. 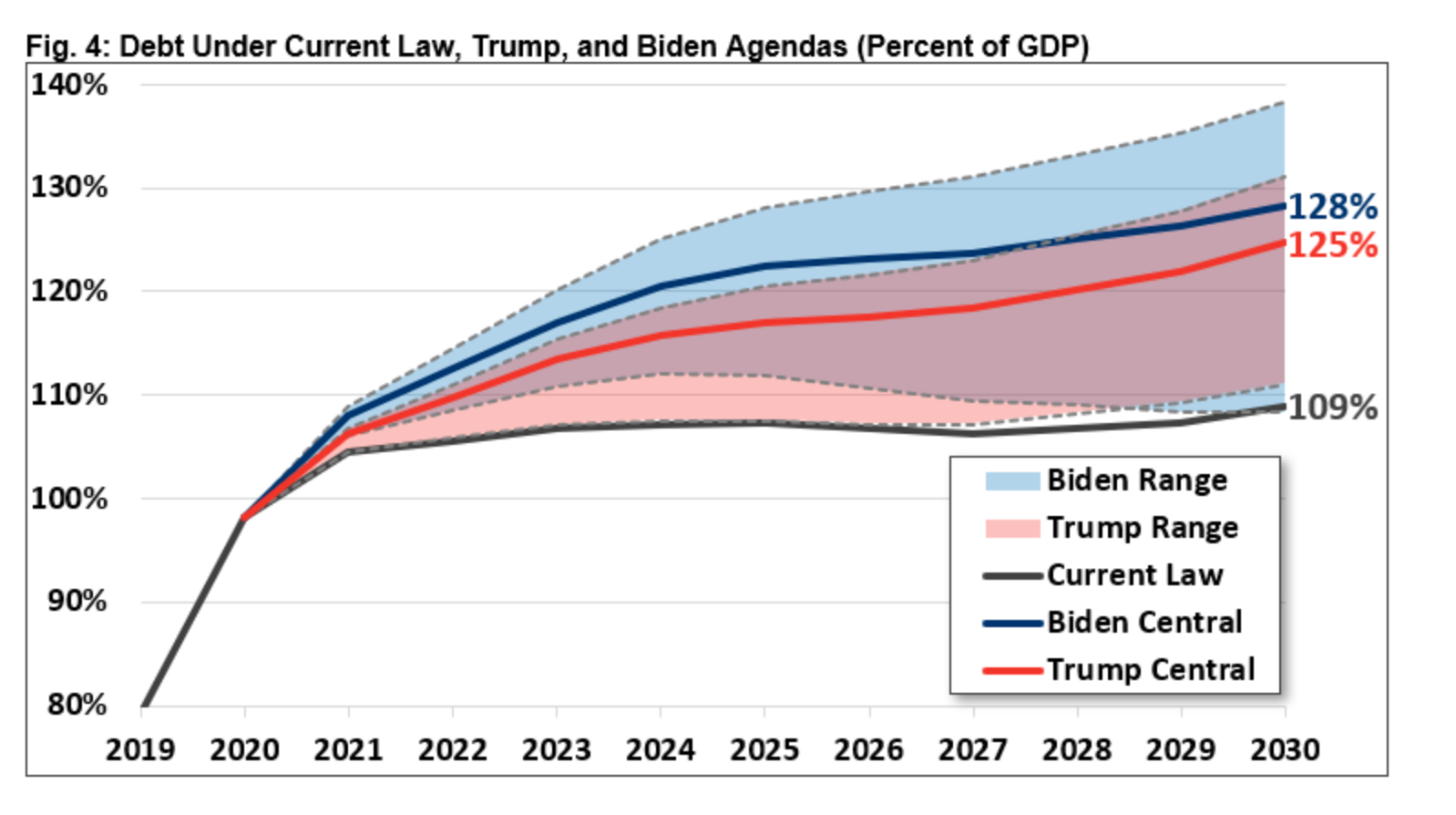 However, you shouldn’t come away from this report with some sort of false equivalency between the Biden and Trump campaigns. For one, the deficit projections for Biden’s agenda are somewhat worse. But much more importantly, we must consider how the two candidates would arrive at these deficits.

Even if deficit outcomes were similar, a scenario with lower taxes and less government spending is highly preferable. It means Americans get to keep more of their own property, less economic harm from anti-growth tax incentives, and less intrusion of the government into the overall economy.

But, we should still take from this report an underlying economic lesson. Absent limits on their power, politicians and government officials of all partisan stripes cannot be counted on to enact fiscally responsible policies. They will always have a strong political incentive to simply splash the cash now for votes and stick the bill—and future fiscal crisis—down the line for future Americans to deal with.

This phenomenon was aptly realized by the Nobel-prize-winning economist James Buchanan, who founded the school of thought known as “public choice” theory.

Public choice theory applies the understanding that rational people act in their own self-interest to the incentives faced by government officials, who are too often naively thought of as benevolent actors who simply act in the “common good.”

This doesn’t mean politicians are evil or even bad people; it means they’re just like everyone else. As EconLib.org puts it, “Public choice assumes that people are guided chiefly by their own self-interests and, more important, that the motivations of people in the political process are no different from those of people in the steak, housing, or car market.”

When self-interest drives individuals’ decision making in free, private markets, the “invisible hand” works its magic. Each person acting in their own interest drives the whole market to an efficient outcome, because all interactions require mutual consent and therefore inherently leave both parties better off. Yet when the same self-interest motivation is applied to politicians, it means that they have the incentive to ignore what’s best for the people in the long-run and simply do whatever best serves their short-term reelection interests.

As the Cato Institute’s David Boaz summarized, “[Buchanan] worried that both majorities and legislatures would be short-sighted, economically ignorant or inefficient, and indifferent to the imposition of burdens on others.”

Those worries sure seem prescient right now. The latest budget reports offer another reminder that we can’t put our trust in Team Red or Team Blue to save the day. Instead, we need to enshrine safeguards into the system itself, such as debt ceilings, mandatory spending cuts via long-term sequesters, or a balanced budget amendment.

Hoping that politicians of any party will lead us out of our current fiscal calamity is deeply naive. But by working together to change the system itself, the American people can steer our country back on track.

This piece was originally posted under the title National Debt Will Explode Under Biden or Trump, New Report Shows on FEE.org