Companies haven’t jacked up prices to even fully match the increase in their costs, let alone exceed them

The federal government just released the latest Producer Price Index (PPI), an index that tracks the prices of a basket of the typical inputs businesses rely on, like energy, warehousing, etc. It finds that prices rose 0.8% from April to May, and a whopping 10.8% from May 2021 to May 2022. The PPI is the Federal Reserve’s preferred metric of price inflation, and this latest update keeps it near a 40-year high.

To see just how extreme this trend continues to be, just check out this graph from Fox Business: 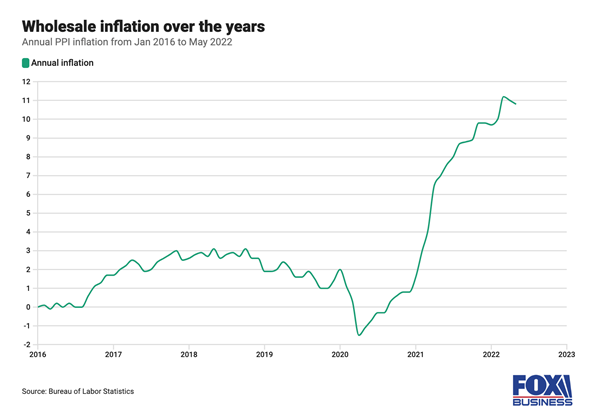 Of course, this latest update comes just one day after another alarming inflation update. Released Monday, the latest Consumer Price Index (CPI) showed an 8.6% year-over-year increase in consumer prices. That metric imperfectly measures prices for a basket of consumer goods a typical US household might buy, and it too remains near 40-year highs.

Well, these updates offer more proof that rising prices are hurting American families, eroding paychecks, and bursting budgets. But we already knew that.

The really interesting insight here comes from comparing the producer price data to the consumer price data. Contrasting the two undercuts the progressive “greedflation” narrative that argues rising prices are in large part due to corporate greed.

“Inflation first rose because of other factors, like Covid and economic stimulus bills,” the New York Times writes in an article explaining what “greedflation” advocates believe. “But companies raised prices more than necessary to net higher profits. They knew they could get away with it because consumers no longer had a benchmark for what prices should be. And they did not face enough competition to keep prices down.”

Or, as Senator Elizabeth Warren argues, “profiteering” and “price-gouging” have driven higher prices because “they [can] get away with it because our markets lack competition.”

But this narrative has never made any sense. For one thing, corporations are no more “greedy,” aka profit-seeking, than they were 5 years ago or 10 years ago, when inflation wasn’t surging. What’s more, some sectors have seen much bigger price hikes than others. Are companies in some industries just less greedy than in other sectors?

“Greedflation” conspiracy theorists cite market concentration, i.e. monopoly power, as why companies can supposedly be what’s driving this. But, as MIT economist David Autor notes, market concentration hasn’t meaningfully shifted in the last two years… while inflation most certainly has!

That’s why a survey of top economists found that the vast majority reject the “greedflation” narrative out of hand.

What’s this have to do with PPI, CPI, and other inflation metrics?

The new data set put the nail in the coffin for the “greedflation” narrative.

Well, if companies were truly being greedy and just jacking up prices to make money, we would expect them to be hiking prices for consumers at a rate higher than their own production costs are going up. But these data sets actually reveal the opposite: consumer prices rose 8.6% while producer prices rose 10.8%—suggesting that, roughly estimating, companies haven’t jacked up prices to even fully match the increase in their costs, let alone exceed them.

Where’s the evidence of this rampant special surge in “greed” we keep hearing about?

It’s nowhere to be seen, of course, because the “greedflation” narrative was always a political talking point simply meant to deflect blame away from the federal government and onto Big Business, a popular boogeyman.

This piece was originally published on FEE.org under the title, More Alarming Inflation Data Undercut the Progressive ‘Greedflation’ Narrative